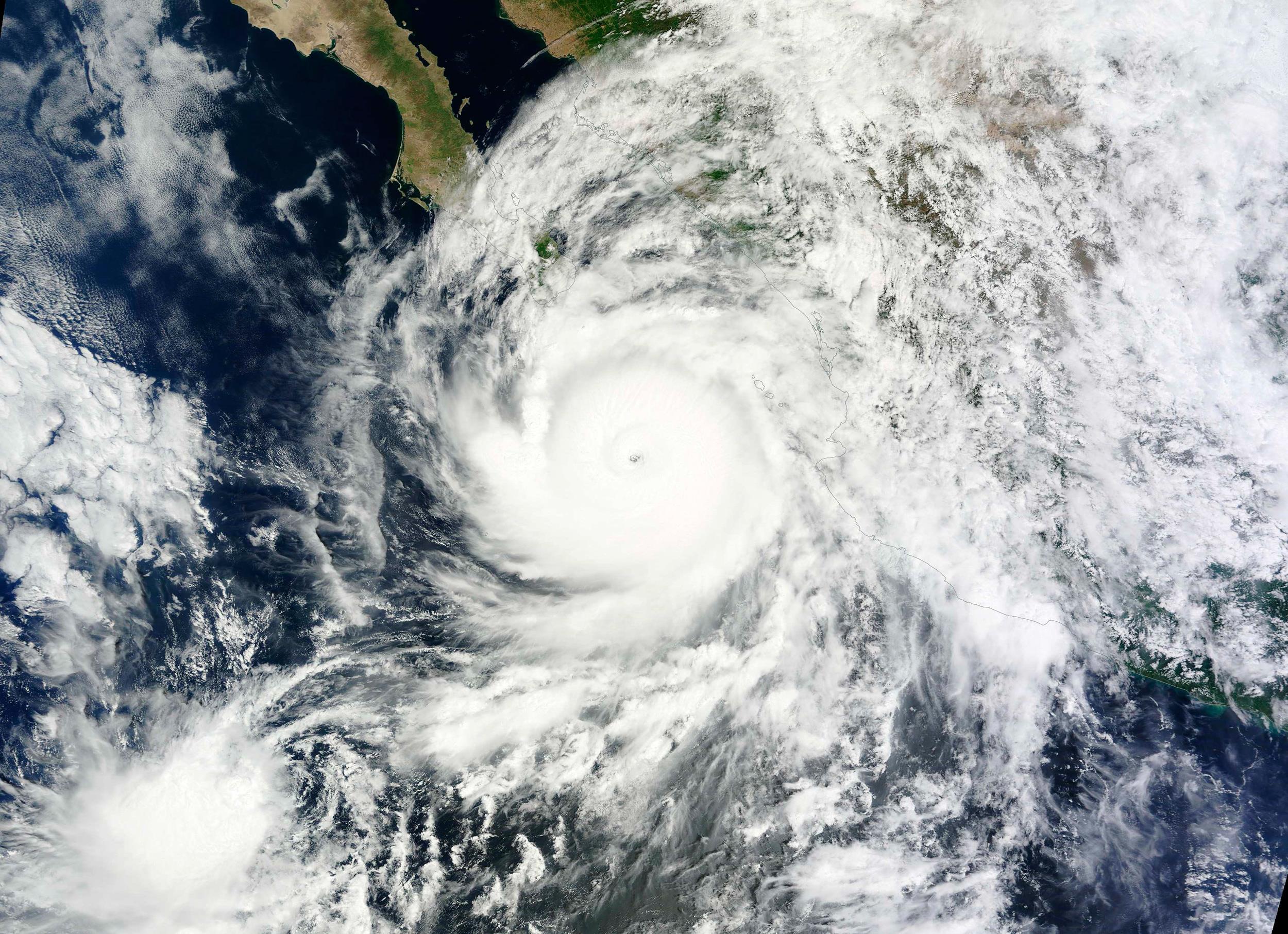 Posted on September 26, 2014 By Alaska Airlines

The airport sustained significant damage by Hurricane Odile and has since been closed for repairs.

Customers who are currently holding a reservation on flight 236 or 251 for Oct. 8 or later do not need to rebook their flight.

“In the following week, we will assess adding more service to Los Cabos from other cities and look forward to increasing our schedule gradually,” said Joe Sprague, senior vice president of communications and external relations for Alaska. “Alaska Airlines has been a strong supporter of the Los Cabos region since 1989, flying thousands of tourists to this popular vacation destination each year and we are looking forward to resuming service there.”

Customers who booked tickets to Los Cabos on or before Sept. 14 for travel through Nov. 20 have three options:

“Reservations agents have been working overtime to reaccomodate customers whose flights have been canceled,” said Mary Avey, Alaska Airlines’ managing director of customer service and call centers. “While hold times may have been longer than normal for people trying to rebook their travel, our goal was to attempt to reach out to every customer impacted by the Los Cabos cancellations by the end of the weekend and we’re on schedule to do that.”

Alaska Airlines has extended its flexible travel policy through Aug. 1, 2015 to give customers plenty of time to rebook their travel or request a refund.

CFE is in Los Barriles and expect to have power restored as quickly as possible.  I have heard that it could be as soon as this weekend.  The hotels are operating on generator power and are 100% operational.  We are getting some reservations from Cabo and La Paz, along with some of the CFE workers who are stay at our hotels.  Because there hasn't been any flights into Los Cabos since the hurricane, there are plenty of rooms available at the moment.  We have heard that the airport will be reopening on October 8th.  Some airlines will be ready to fly into SJD by October 8th and others will take longer.  We should have more information on this in a few days.  We are aware that many people have received notices that their flights have been cancelled.  We are encouraging guests not to cancel their reservations with us until next week as there is a big push right now by the Mexican Government to have all flights resume service into Los Cabos sooner than later.  There should be new information coming out on this in the coming days.  Let's hope for the best and hopefully we can resume normal operations in October.  We will post any new information as we receive it.  Thank you!

Update 9/23/14 at 12:00pm
The hotels are in great shape. There is a photo from 2006 that has been circulating around the internet of the entry way that was destroyed by hurricane John. Again this is from 2006. The hotel is in great shape. We are just waiting for federal power which we hope to have restored by weeks end. As soon as the Airport reopens, we will be ready to go 100%. Here are a few pictures of Palmas De Cortez that were sent to me last week by our boat dispatcher Anibal and Mark Rayor of Jen Wren Sportfishing.   I will post more pictures of the hotel as soon as I can. 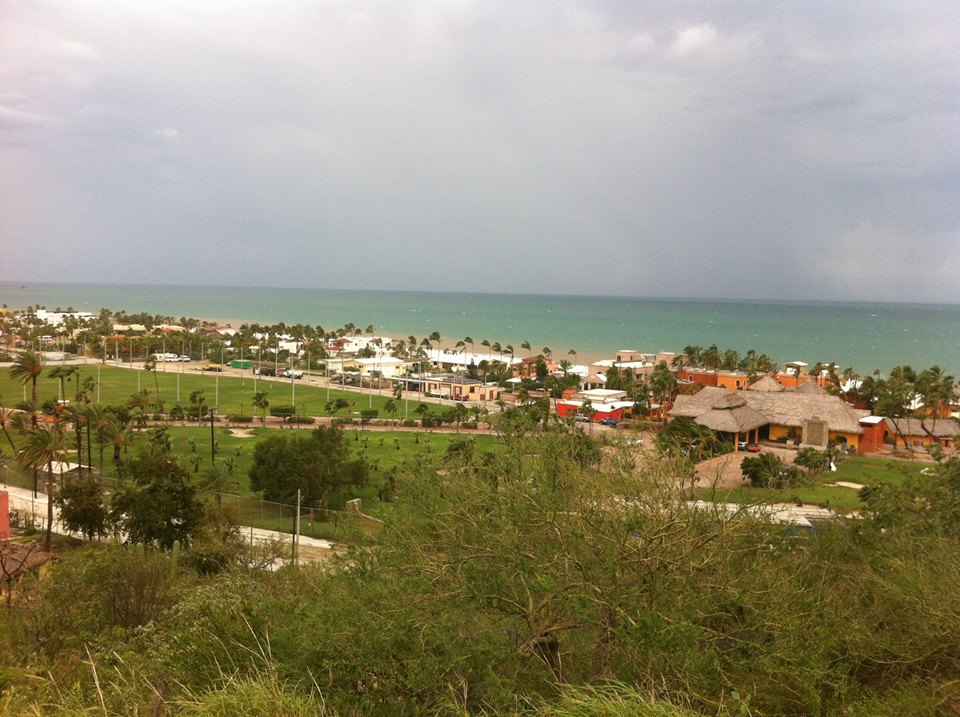 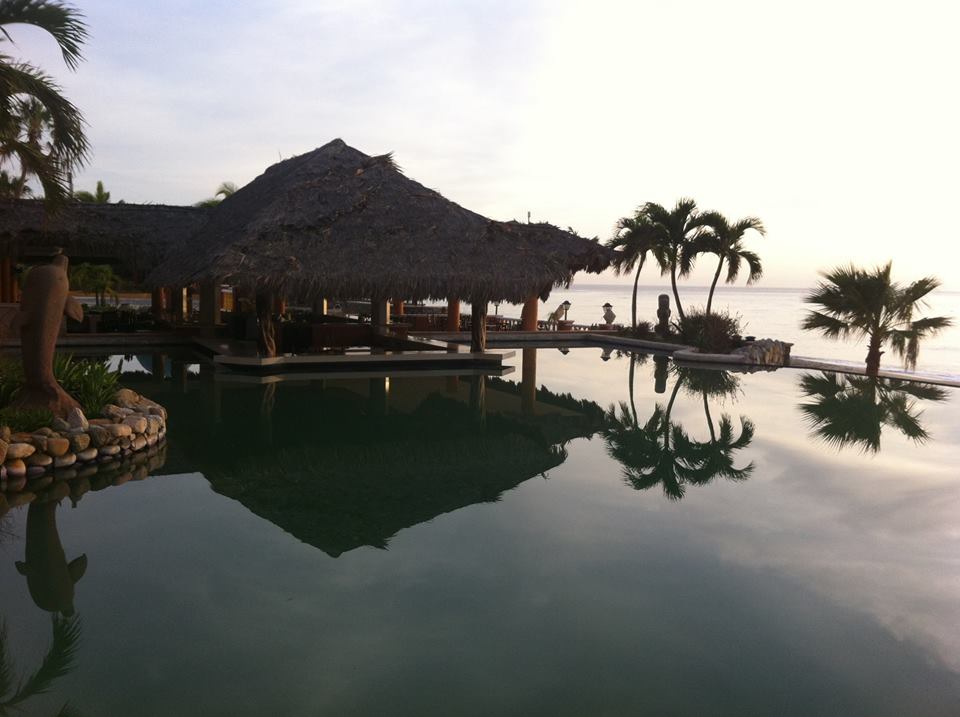 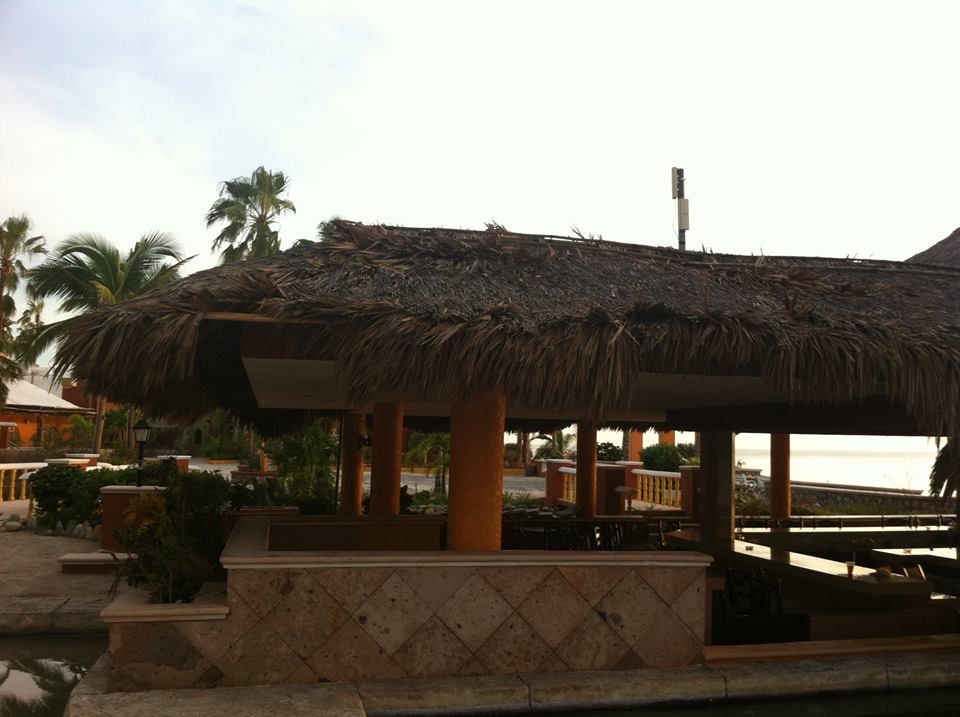 Markets are stocked with fresh produce and plenty of beer! 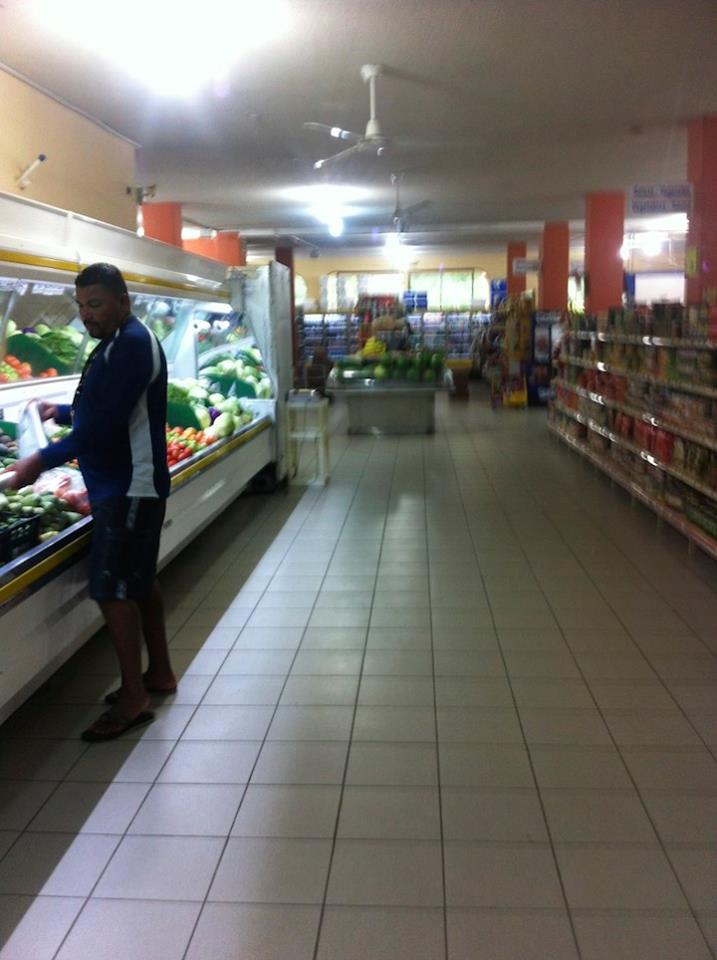 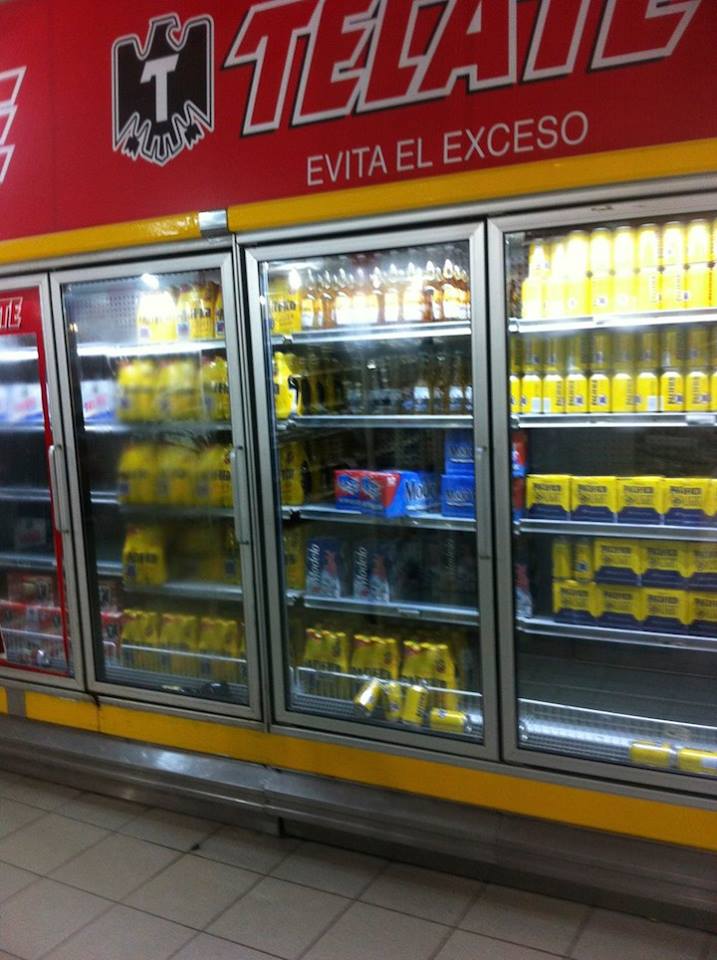 Not much has changed over the weekend in Los Barriles. The town continues to be without electricity and water. Due to the rain over the weekend, the road to Cabo is once again closed for a few days for repairs. There are currently no guests at either of the resorts, as all tourists have made their way home. There is no word as to the official date for the reopening of the airport in San Jose Del Cabo. We continue to hear possibly September 30th. The road north to La Paz is still open and supplies are arriving and the markets are stocked. We will continue to post as new information become available.

Just got off the phone with Hotel Palmas De Cortez. They still do not have federal power and continue to run on generators. We are now down to 14 guests, down from 45 on Wednesday. We have confirmation now that the road from Cabo all the way to Loreto is open. Our ground transportation company has traveled to Cabo and to Loreto and they were able to get there and back. Still no definite word on when the SJD airport will reopen. We are still hearing anywhere from 7-10 days before they reopen SJD. We will update once we have a firm date.

We now have confirmation that the road is open from San Jose to Los Barriles.  Evacuations are ongoing from the Los Cabos airport and the La Paz airport.  We still have no word on when the airports will reopen, but some unconfirmed sources are saying it can be 7-10 days.  The hotel and all their guests are in good spirits.  A few boats went out fishing today.  Many guests are making arrangements to be evacuated as soon as possible.  There was very little damage to Los Barriles and the surrounding area, so we are just waiting for the airport to reopen, so that we can start receiving guests.  We will continue to update as new information becomes available.

Just spoke with Anibal at Hotel Palmas De Cortez and he said that everyone is doing good at the hotels. Playa Del Sol has full generator power with lights and A/C currently working. Palmas De Cortez only has one of two generators still working, so only half the hotel has power. Many guests have moved over to Playa Del Sol to take advantage of the power. The road to the airport is still not open, but they expect it to be open in a day or two. The road to La Paz is open and we have had cars make it there and back today.

Three cruisers and one super panga went fishing today and caught lots of tuna and dorado, which will be dinner for the hotel tonight!!! Still waiting to hear about the reopening of the airport in Los Cabos. I've heard reports that American Airlines has cancelled flights until Thursday. Anibal told me that the town is in good shape. Hardly any downed trees or power lines in the area. Lots of cleaning up and drying out to do. Land lines are now working and they do have areas with internet service, however It seems that cell service is still down in the LB area. Will continue to update as new info becomes available.

We just made contact with Hotel Palmas De Cortez.  Three vans left for the airport in La Paz in an attempt to get guests back to the States, but there were so many people there that the decided to come back.  The road from Los Barriles to the Airport in Los Cabos is still not open, but they said they are sending crews with heavy equipment and should be reopened soon.  The hotel has one of two generators currently working.  Phones and internet are up and down as they try to restore services.  Some guests are making the best of a bad situation and our out fishing today.  Will continue to update as information becomes available.

Still no power or communications with the hotels or Los Barriles.  Hoping to have communication with them soon, but no guarantees.  The road from the airport to the hotel seems to be open.  Earliest commercial flight into the Los Cabo airport, based on guests calling us to reschedule, seems to be for Monday.  The hotel is in good shape and is just awaiting the return of it's utilities. Once flights resume into Los Cabos, we will be ready to receive guests. We will continue to update as information becomes available.

Power and communications are still down in Los Barriles. We are now hearing that the road between Los Barriles and SJD airport has reopened. Will try to confirm this as soon as possible. Air evacuations out of SJD into Tijuana have begun. 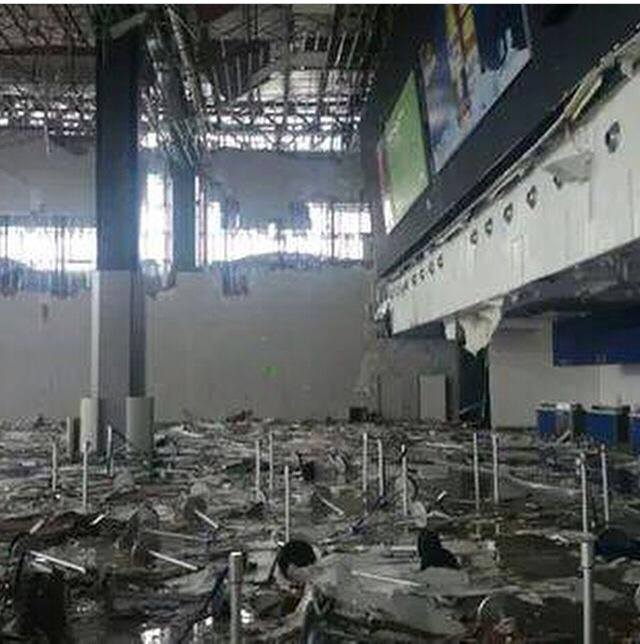 Some pictures out of Los Barriles.  Not too many images available as communications have been down all day. 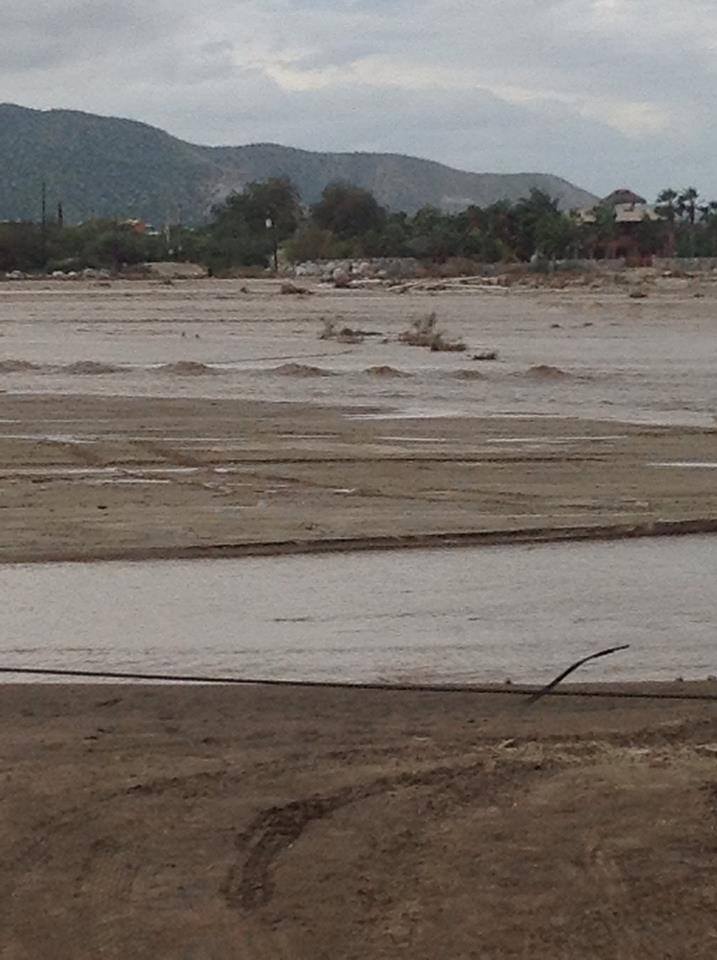 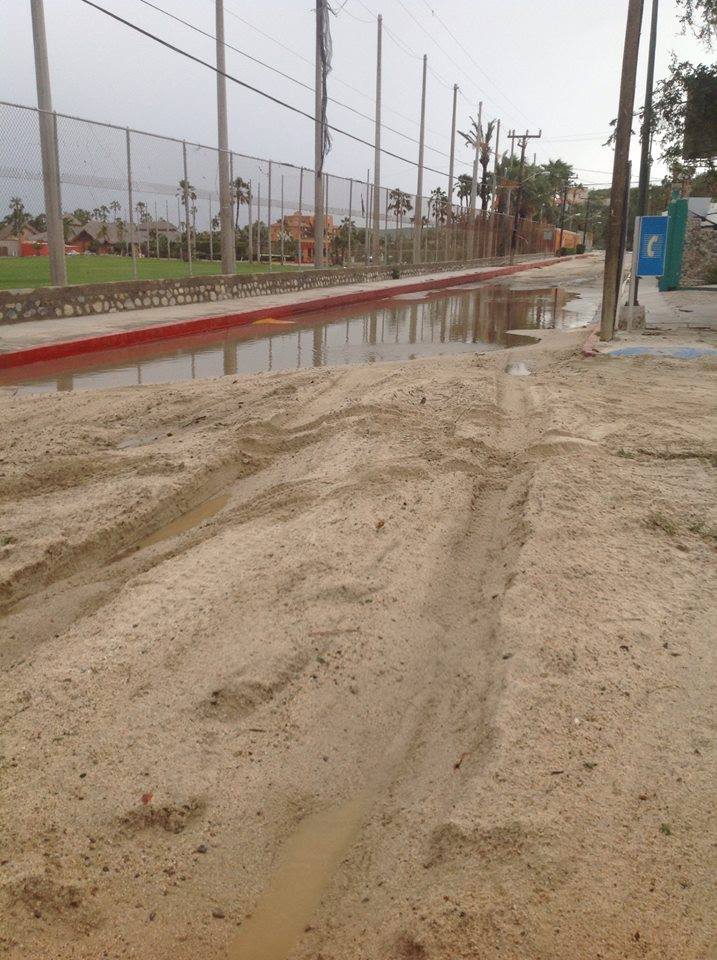 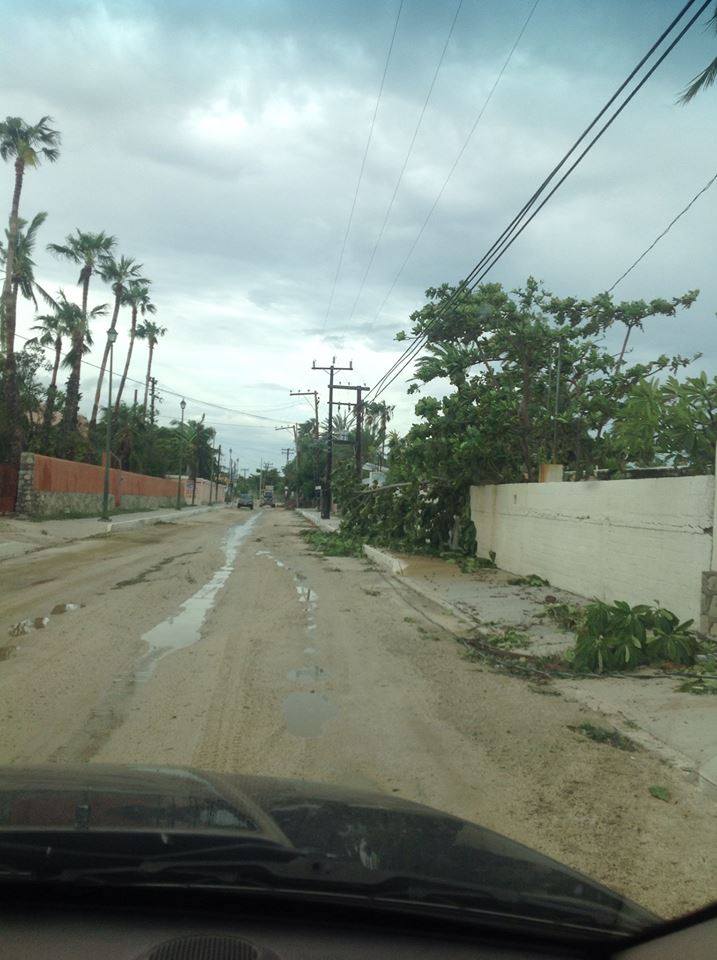 As most of you have heard hurricane Odile made a direct hit on the Baja at Cabo San Lucas and is now headed up the Pacific side of the Peninsula. Wind damage and flooding are creating problems all along the storm track. The good news for us on the East Cape is that the wind and rain damage is relatively light. The hotels suffered a few broken windows and damage to the Palapa over the bar at Playa del Sol.  The Airport sustained major damage and it may take some time to reopen.  We are hearing that the earliest it will reopen would be Sunday, September 21st.  Other reports have the airport reopening in two weeks.  We understand that evacuation efforts will begin soon to evacuate tourists from the area.

Currently in Los Barriles there is no power and all communications are down.  We are hoping to have power restored in a few days.  The hotels are running on generator power and everyone is safe and accounted for.  We do have two people in the states that are answering phones, but they are only able to answer questions at this time as they do not have access to the reservation system.  We will update you as soon as we have any information. If you are on facebook, please monitor our page for more updates and photos.  https://www.facebook.com/vanwormerresorts